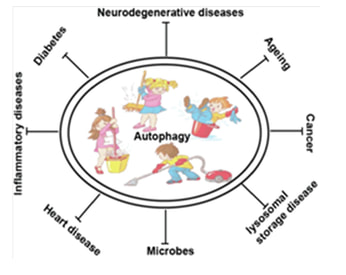 Research Interests:
Autophagy and Inflammation
Autophagy is a fundamental catabolic process involved in cellular garbage degradation and recycling thus maintaining cellular metabolism and homeostasis. It is essential for cellular differentiation and embryonic development in mammals. In addition to these basic functions, autophagy plays several specialized roles in eukaryotic cells including cell-autonomous defense against intracellular pathogens and control of chronic inflammation. Not surprising, defects in autophagy have been linked to several diseases including cancer, neurodegeneration and cardiac pathologies.
My major research interests are:
Summary of Selected Publications: 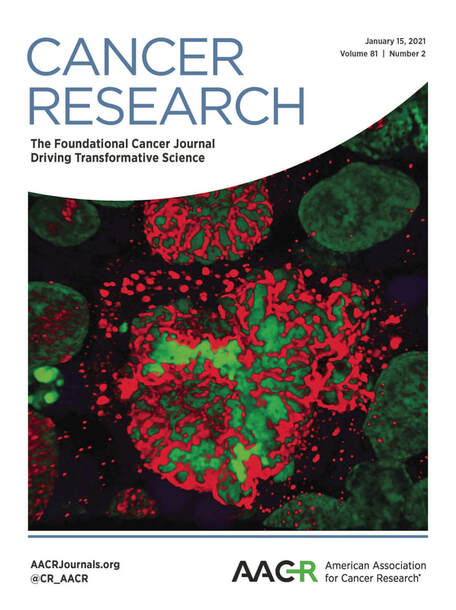 DZIP3/hRUL138 is a poorly characterized RNA binding RING E3-ubiquitin ligase with functions in embryonic development. In this study,  we demonstrated that DZIP3 is a crucial driver of cancer cell growth, migration, and invasion. In mice and zebrafish cancer models, DZIP3 promoted tumor growth and metastasis. In line with these results, DZIP3 was frequently overexpressed in several cancer types. Depletion of DZIP3 from cells resulted in reduced expression of Cyclin D1 and a subsequent G1 arrest and defect in cell growth. Mechanistically, DZIP3 utilized its two different domains to interact and stabilize Cyclin D1 both at mRNA and protein levels. Using an RNA-binding lysine-rich region, DZIP3 interacted with the AU-rich region in 3'UTR of Cyclin D1 mRNA and stabilized it. Using a RING E3-ligase domain, DZIP3 interacted and increased K63-linked ubiquitination of Cyclin D1 protein to stabilize it. Remarkably, DZIP3 interacted with, ubiquitinated, and stabilized Cyclin D1 predominantly in the G1 phase of the cell cycle where it is needed for cell cycle progression. In agreement with this, a strong positive correlation of mRNA expression between DZIP3 and Cyclin D1 in different cancer types was observed. Additionally, DZIP3 regulated several cell cycle proteins by modulating the Cyclin D1-E2F axes. Taken together, this study demonstrated for the first time that DZIP3 employs a unique two-pronged mechanism in its stabilization of Cyclin D1 to drive cell cycle and cancer progression.
Cover Page: During mitosis, Ki-67 (red) is necessary for the formation of the perichromosomal layer and prevents chromosomes from collapsing into a single chromatin mass. Thus, the cells undergoing mitosis can be easily recognized using Ki-67 immunostaining, as the nucleus (blue) gives a floral appearance. A significantly higher number of mitotic floral cells were observed in control tumors as compared with the DZIP3 knockdown tumors. 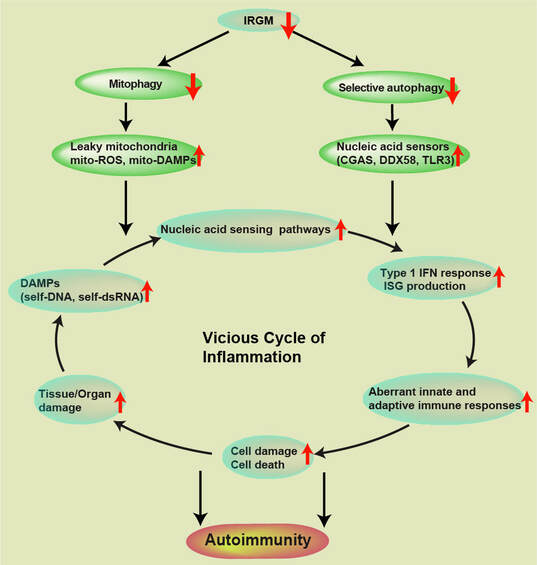 ​Title: IRGM links autoimmunity to the autophagy (mitophagy)
Our recent work published in EMBO Reports journal provides mechanistic insight of genesis and progression of autoimmune diseases. Interferon response over activation plays a significant role in the pathogenesis of several autoimmune diseases. We found that autophagy (and mitophagy) plays a significant role in the suppression of interferon response.

The type I interferon (IFN) response, where one side is first-line of defense against invading pathogens (esp. viruses including SARS-COV2), on the other side, its uncontrolled activation can lead to several autoimmune diseases. A fine homeostatic balance of type I IFN’s needs to be maintained to avoid autoimmune diseases. The knowledge of the master switches and the mechanisms that suppress the type I IFN response will be beneficial for generating therapeutics against autoimmune and viral diseases.

This study uncovers that under homeostatic conditions, IRGM is a master suppressor of type I IFN response. The mRNA sequencing whole transcriptome analysis in human cells and mice shows that IRGM controls the expression of almost all major Interferon Stimulated Gene's. Mechanistically, we show that IRGM suppresses IFN signaling by mediating p62-dependent autophagic degradation of cGAS, RIG-I, and TLR3. Further, we found that IRGM is critical for the removal of damaged mitochondria by macroautophagy. Thus, IRGM deficiency results in defective mitophagy, accumulation of dysfunctional mitochondria, and enhanced mitochondrial DAMPs that stimulate cGAS-STING and RIG-I-MAVS axis to drive robust activation of type I IFN response leading to autoimmunity.
​
A prominent role of IRGM in suppressing inflammation presented in this study or previously by our lab (Mehto et al., 2019),  justify why IRGM protein, which was dead for 20 million years of evolution, might have revived back in ancestors of humans.  This study also defines IRGM as a strong potential target for new therapeutic interventions against autoimmune diseases and viral diseases.
​ 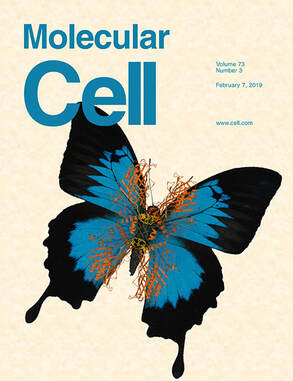 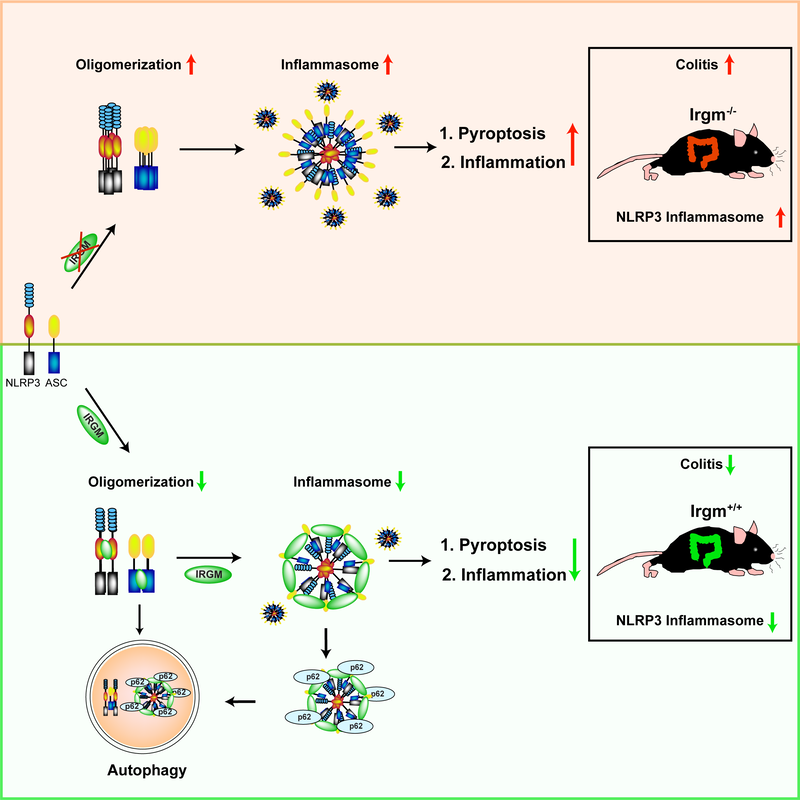 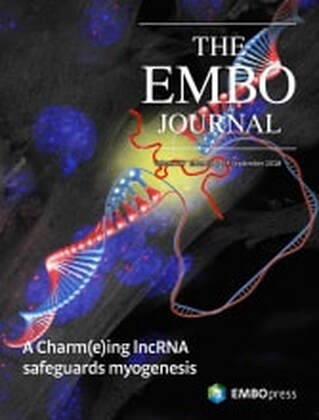 Laymen Title: Understanding the mechanism of safe disposal of stress-induced proteins aggregates for increased survival of body cell: implication in neurodegeneration and cancer.

Scientific Understanding
Misfolded proteins are a common outcome of protein biosynthesis in our body cell, and about 30% of newly synthesized proteins end up misfolded. Normally, these misfolded proteins are ubiquitinated and degraded by the proteasome system and/or autophagy process. Multiple factors ranging from genetic mutations (in neurodegeneration) to cellular (oxidative/proteotoxic stress) and environmental stresses can trigger protein misfolding overwhelming the cellular capacity to clear them leading to their aggregation and accumulation resulting in many pathological conditions collectively termed as proteinopathies (Alzheimer’s, Parkinson’s, amyotrophic lateral sclerosis, etc.).
On the flip side, a recent study showed that the augmented capacity to degrade the misfolded proteins alleviates oxidative stress associated with cancerous growth and is required for both the initiation and maintenance of malignant phenotypes (Chen et al. 2017, Cell reports). So the cancer cells hijack the machinery of protein quality control and utilizes them for their survival.
Given the paramount importance of process (in neurodegeneration and cancer) of formation of protein aggregates from misfolded proteins and their subsequent degradation, it is vital to understand the mechanism by which turnover of protein aggregates takes place in the cell. Till date, the mechanism by which protein aggregates are formed and degraded in cell remains elusive.
In this study, we discovered a novel mechanism by which cells during the oxidative or proteotoxic stress conditions can turn over the protein aggregates for their better survival. Two proteins namely, TRIM16 and NRF2 governs a protein machinery (p62 and ubiquitination) to regulate the process of protein aggregates formation and subsequently the TRIM16 engages autophagy machinery (a process of degradation in our cell) to degrade the protein aggregates. Thus, TRIM16 streamlines the process of stress-induced aggregate clearance and protects cells against oxidative/proteotoxic stress-induced toxicity. Thus, pharmacological targeting of TRIM16 for increasing its activity will be useful in neurodegeneration. On the flipside, we found that genetic knockout of this protein in cancer cells cripples their capability to handle oxidative stress or oncogenic stress leading to significant reduction in tumor size. Thus, pharmacological targeting of TRIM16 for decreasing its activity will be useful in killing cancer cells.
Laymen Understanding:
The formation of protein aggregates is a hallmark of neurodegeneration. The accumulation of protein aggregates due to incapability of neurons to clear them leads to cell death and is linked to pathological conditions in neurodegenerative diseases. On the flipside, cancer cells are smart enough to degrade stress-induce protein aggregates by hijacking the protein quality control machinery and survive in worse stress conditions (in which normal cell will die). Understanding the mechanism of protein aggregates turnover will pave path for therapeutic interventions of neurodegeneration and cancer. In this study, we defined a novel mechanism by which cells handle stress-induced protein aggregates turnover. TRIM16 uses two-pronged approach for complete turnover of protein aggregates under stress conditions. It governs the NRF2 mediated anti-oxidant system, ubiquitin mediated protein folding machinery and autophagy-mediated degradation machinery to accomplish this task. Hence therapeutic targeting of TRIM16 could be useful in neurodegeneration and cancer. 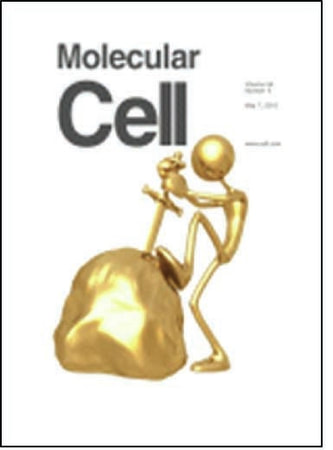 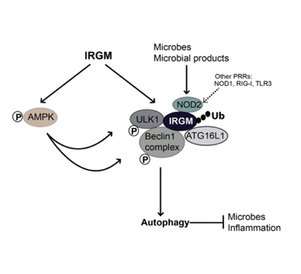 ​Polymorphisms in the IRGM gene, associated with Crohn disease (CD) and tuberculosis, are among the earliest identified examples documenting the role of autophagy in human disease. Functional studies have shown that IRGM protects against these diseases by modulating autophagy, yet the exact molecular mechanism of IRGM's activity has remained unknown. We have recently elucidated IRGM's mechanism of action. IRGM functions as a platform for assembling, stabilizing, and activating the core autophagic machinery, while at the same time physically coupling it to conventional innate immunity receptors. Exposure to microbial products or bacterial invasion increases IRGM expression, which leads to stabilization of AMPK. Specific protein-protein interactions and post-translational modifications such as ubiquitination of IRGM, lead to a co-assembly with IRGM of the key autophagy regulators ULK1 and BECN1 in their activated forms. IRGM physically interacts with two other CD risk factors, ATG16L1 and NOD2, placing these three principal players in CD within the same molecular complex. This explains how polymorphisms altering expression or function of any of the three factors individually can affect the same process - autophagy. Furthermore, IRGM's interaction with NOD2, and additional pattern recognition receptors such as NOD1, RIG-I and select TLRs, transduces microbial signals to the core autophagy apparatus. This work solves the long-standing enigma of how IRGM controls autophagy. 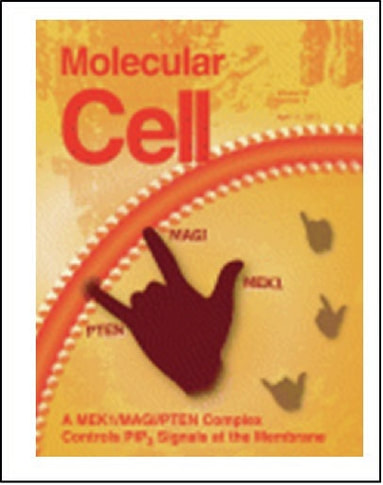 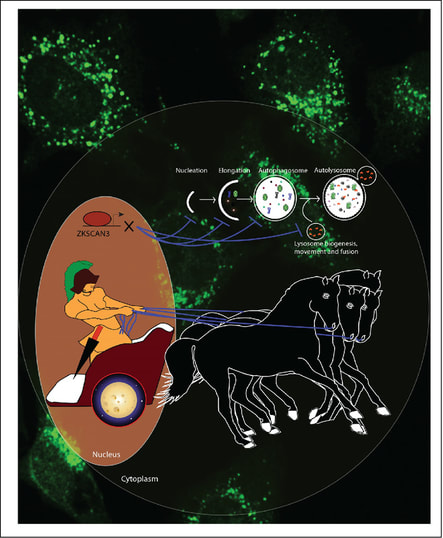 Autophagy constitutes a major cell-protective mechanism that eliminates damaged components and maintains energy homeostasis via recycling nutrients under normal/stressed conditions. Although the core components of autophagy have been well studied, regulation of autophagy at the transcriptional level is poorly understood. In this paper, we establish ZKSCAN3, a zinc finger family DNA-binding protein, as a transcriptional repressor of autophagy. Silencing of ZKSCAN3 induced autophagy and increased lysosome biogenesis. Importantly, we show that ZKSCAN3 represses transcription of a large gene set (>60) integral to, or regulatory for, autophagy and lysosome biogenesis/function and that a subset of these genes, including Map1lC3b and Wipi2, represent direct targets. Interestingly, ZKSCAN3 and TFEB are oppositely regulated by starvation and in turn oppositely regulate lysosomal biogenesis and autophagy, suggesting that they act in conjunction. Altogether, our study uncovers an autophagy master switch regulating the expression of a transcriptional network of genes integral to autophagy and lysosome biogenesis/function.

Autophagy is a conserved homeostatic process active in all human cells and affecting a spectrum of diseases. In this study, we use a pharmaceutical screen (>3000 FDA approved drugs) to discover new mechanisms for activation of autophagy. We identify a subset of pharmaceuticals inducing autophagic flux with effects in diverse cellular systems modelling specific stages of several human diseases such as HIV transmission and hyperphosphorylated tau accumulation in Alzheimer's disease. One drug, flubendazole, is a potent inducer of autophagy initiation and flux by affecting acetylated and dynamic microtubules in a reciprocal way. Disruption of dynamic microtubules by flubendazole results in mTOR deactivation and  dissociation  from  lysosomes  leading  to  Transcription  Factor  EB nuclear translocation and activation of autophagy. By inducing microtubule acetylation, flubendazole  activates  JNK1  leading  to  Bcl-2  phosphorylation,  causing  release  of Beclin-1 from Bcl-2-Beclin-1 complexes for autophagy induction, thus uncovering a new approach to inducing autophagic flux that may be applicable in disease treatment.